skip to main | skip to sidebar

Not Your Average Underdog

The Dallas Morning News has written a thoughtful endorsement of Mike Huckabee for President.
Posted by AWJ at 12:17 PM No comments:

More on the FairTax

The Fair Tax Is About Economic Growth

This is a good article about the FairTax, one of the fundamental planks of Mike Huckabee's run for President. I find it interesting that this article is written by Louis R. Woodhill, a member of the Club for Growth's Leadership Council... a group which seems terrified of Huckabee's candidacy.
Posted by AWJ at 12:30 PM 1 comment:

FactCheck.org Adds Perspective to the Claims of Mitt Romney's Attack on Governor Huckabee.

It is instructive to consider whose best interests a Governor has in mind when considering commutations. Clearly the law gives the Governor the responsibility to consider the applications and to make those decisions. It will never benefit a Governor politically to grant pardons or commutations, but it may be in the best interest of justice and/or the people of the state.

While Gov. Huckabee granted just over 10% of the more than 8700 requests brought him in ten and half years in Arkansas, Gov. Romney granted zero of the 100 requests brought before him in his four years in Massachusetts. Google the news for a Bronze Star recipient named Lt. Anthony Circosta (from Agawam, MA) to learn of a particularly offensive refusal. When a decorated Army officer is prevented from becoming police officer because of a refusal to pardon a conviction from a BB-gun incident (that drew no blood!) incurred at age thirteen, it seems to be clear that Gov. Romney is most concerned about Gov. Romney's political future. In Circosta's case, Romney ignored the recommendation of state's Board of Pardons.
Posted by AWJ at 11:40 PM No comments:

I like Mike because he is a leader who has consistently stood for things I value most in a national leader. He supports the sanctity of life, conservative economic principles such as limiting the size and role of government, and Mike is concerned about the widening rift between Americans. I like that Mike supports the individual freedoms of the 2nd Amendment. I like that Mike supports replacing our complicated Tax system (indeed, replacing the whole IRS) with the Fair Tax.

In short, I believe Mike has set his priorities well and he maintains a good perspective. He leads in the direction he feels is right rather than waiting for a public opinion poll to learn what his position on an issue should be.

I endorse Mike Huckabee for President of the United States in 2008. I encourage you to support his candidacy as well.
Posted by AWJ at 3:24 PM No comments:

This Guy Gets It

Obviously the ability to put out good advertisements isn't the primary skill one looks for in Presidential candidates... but the ability to maintain perspective through stressful and hectic schedules is - and obviously Huck's got that.
Posted by AWJ at 3:16 PM No comments:

Former Arkansas Governor Mike Huckabee continues his surge toward the lead in the race for the Republican Presidential Nomination. These are exciting times to see him overtake the other candidates. I trust that as his poll numbers' growth rate slows (and it will or he'll pass 100% before the Nov election) that supporters will stay true even as we begin to feel withdrawal from the recent waves of good news, which have been arriving almost daily for nigh unto a month now. Things have gone very well of late, and it's easy to be excited when things go well... but this is a long race, and we will need to stay the course throughout.
Posted by AWJ at 7:30 AM No comments:

I agree with many of Huckabee's positions such as the sanctity of life, his belief in God, the need to overhaul the tax system in America, and the need to address America's health problems... and I could go on. But I think one thing that attracts me even beyond giving mental agreement to his positions on issues is his demeanor in these early days of the campaign. Mike seems to be an American first and a conservative second. "I'm conservative, but I'm not angry about it" is a quote which expresses this. I've seen (and heard) many today trying to get their way by shouting the loudest... that doesn't sit so well in the long run.

I understand that many of Huckabee's positions are controversial. But unlike the previous Governor from Hope, Arkansas, Mike builds his positions from his beliefs and leads with them rather than building his positions from popular opinion polls and following the crowd he should be leading.

Mike is very articulate. His positions on issues are well described in videos on his website www.mikehuckabee.com. I encourage you to learn about him and listen to him.
Posted by AWJ at 1:02 AM No comments: 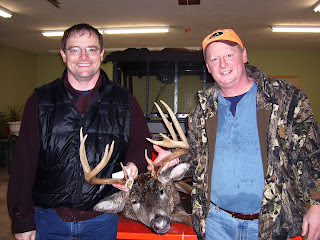 I have attached a photo of the buck I bagged this week. This is my first large buck and it was quite exciting and gratifying. I've been hunting since 1991. I always enjoy being in the woods and getting away from the IT world of my job. I'm not an avid hunter - I began hunting as a means to spend meaningful time with my father and brother. Through the continued generosity of the family friend who owns the land we hunt, I still have the opportunity to continue hunting with my brother (also in the picture) even this seventh year after my Dad's passing. I've also had the opportunity to take my oldest three children hunting with me in the preceding years. Hunting has provided me with memories I'll cherish for years.
Posted by AWJ at 12:36 AM No comments: