skip to main | skip to sidebar

Upon Further Review... Little Has Changed

Ten days after Gov. Huckabee was defeated in the Republican primaries of Ohio and Texas, some of my anger has subsided. My disgust has not.

A friend who is a Republican asked me if I would now support Sen. McCain in the general election. My initial response to him was that perhaps Sen. McCain should seek support among those who believe like he does: those who support amnesty for illegal immigrants, those who opposed the Bush tax cuts, and those who support embryonic stem cell research. (I then noted that most of those voters are already supporting either Barack Obama or Hillary Clinton.)

The issues that are most important to me and which led me to support Gov. Huckabee for President were the Sanctity of Life, support of the FairTax, and decreasing the size of government. The Republican Party does not seem to have learned anything from their free-spending ways which led to their defeats in 2006.

I don't see myself supporting either Sen. McCain nor Steve Stivers in the fall. There's just not much difference between their positions and those of their Democratic opponents in the issues which matter the most to me.
Posted by AWJ at 11:24 AM 1 comment:

I am angry beyond my ability to describe.

I'd like to play the good sport and congratulate the winner but this isn't a stupid game. Unborn babies will continue to be murdered because of the choices Americans made tonight in Vermont, Texas, Ohio, and Rhode Island.

I see how little John McCain motivates conservatives and I wonder if the leadership at National Right to Life are proud of their endorsement of Fred Thompson. May God replace them all.

I believe the Republican party has forfeited the general election. May God grant health (and a desire to work four more years) to the Supreme Court justices who survive until the end of Pres. Bush's term.
Posted by AWJ at 11:43 PM No comments:

Here's an excellent article by Janet Folger at WorldNetDaily...
Posted by AWJ at 4:24 PM No comments: 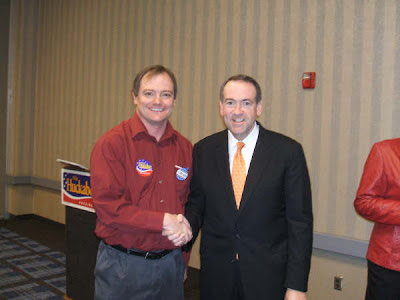 I got to meet Gov. Huckabee before last week's rally in Columbus. I didn't get much time to talk with him, and I wish I'd have focused that time more on him than on getting pictures taken; but hindsight is always 20/20.
Posted by AWJ at 12:54 PM No comments:

This is the endorsement of the Dallas Morning News announcing their support for Mike Huckabee's presidential campaign.
Posted by AWJ at 12:52 PM No comments:

I got to meet Gov. Huckabee last Tuesday just prior to his rally in Columbus. I'll post a picture shortly.

Today I spent a few hours with some dedicated Huckabee supporters at a Gun Show on the west side of Columbus. My first trip to a gun show was an enjoyable time. Here's hoping that many of those gun owners will step up and protect our 2nd Amendment rights this Tuesday with votes for Gov. Huckabee.
Posted by AWJ at 12:14 AM No comments: